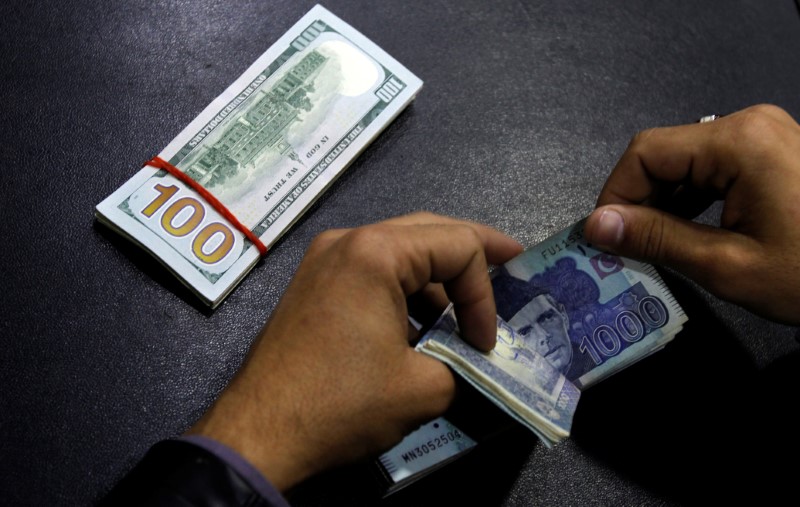 © Reuters. A currency trader counts Pakistani Rupee notes as he prepares an exchange of U.S dollars in Islamabad

The latest loan highlights Islamabad’s growing dependence on Chinese loans to buffer its foreign currency reserves, which plunged to $9.66 billion last week from $16.4 billion in May 2017.

The lending is the outcome of negotiations for loans worth $1-$2 billion that was first reported by Reuters in late May, the two sources told Reuters.

“Yes, it is with us,” said one finance ministry source, in reference to the Chinese money. The second source added that the “matter stands complete”.

The finance ministry spokesperson did not respond to a Reuters request for comment.

With the latest loan, China’s lending to Pakistan in this fiscal year ending in June is set to breach $5 billion.

In the first 10 months of the fiscal year China lent Pakistan $1.5 billion in bilateral loans, according to a finance ministry document seen by Reuters. During this period Pakistan also received $2.9 billion in commercial bank loans mostly from Chinese banks, ministry officials told Reuters.

Beijing’s attempts to prop up Pakistan’s economy follow a strengthening of ties in the wake of China’s pledge to fund badly-needed power and road infrastructure as part of the $57 billion China-Pakistan Economic Corridor (CPEC), an important cog in Beijing’s vast Belt and Road initiative.

But analysts say China’s help will not be enough and predict that after the July 25 national election the new administration will likely seek Pakistan’s second bailout since 2013, when it received a package worth $6.7 billion from the IMF.

“Looking at the current scenario, it is likely after the new government comes in that they will go to the IMF,” said Suleman Maniya, head of research at local brokerage house Shajar Capital.