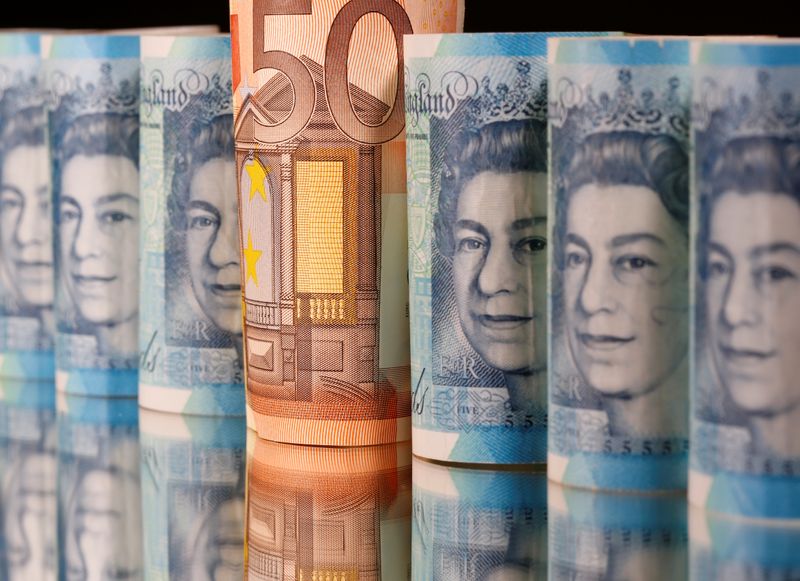 © Reuters. Pound and euro banknotes are seen in this illustration

NEW YORK (Reuters) – The euro dropped to more than two-year lows against the dollar on Thursday as concerns about a sharp rise in the number of new cases in the coronavirus outbreak in China led investors to seek out U.S. assets.

The United States is better placed to weather the economic impact of the virus than the eurozone.

The coronavirus death toll in China’s Hubei province increased by a record 242 on Thursday to 1,310, with a sharp rise in confirmed cases after the adoption of new methodology for diagnosis, health officials said.

“Europe, and Germany in particular, have very strong trade linkages to Asian markets, and specifically with China,” said Mazen Issa, senior FX strategist at TD Securities in New York. “Coming into the year, expectations were for a moderate growth rebound. While it did seem reasonable at the time, the disruptions are going to delay that narrative.”

The euro () dropped as low as $1.0835, the lowest since May 2017. It breached technical support at the October low of $1.0877 on Wednesday. That leaves the currency vulnerable to further losses, analysts said.

The single currency also fell against the safe haven Swiss franc () to 1.0610 francs, its lowest level since August 2015.

Expectations that central banks will hold rates low, and may provide more accommodation if the coronavirus harms the global economy, is supporting risk appetite and may reduce the likelihood of a sharp selloff in stocks.

“The perspective is that rates will remain low, and that is cushioning some of the downside on the equity side,” Issa said.

Stocks overcame earlier weakness to hit record highs on Thursday. They have set a record closing high every day this week.

U.S. data on Thursday showed that U.S. underlying consumer prices picked up in January as households paid more for rents and clothing, supporting the Federal Reserve’s contention that inflation would gradually rise toward its 2% target.

The coronavirus outbreak is likely to hit China’s economy over the course of two quarters, Stephen Roach said on Friday. “The Chinese economy is flat-lining right now,” said Roach, who is a senior fellow at […]

(Bloomberg) — India’s economy slowed to a more than six-year low in the final three months of last year, and it now faces a fresh threat from the coronavirus outbreak. Data on Friday showed growth […]

Crude Oil Price Forecast: Coronavirus fears helped spark drastic stock market and crude oil declines A critical break beneath support has opened the door for further losses Looking ahead, the price of crude may be […]

Germany in warning over a virus epidemic – The Related Press